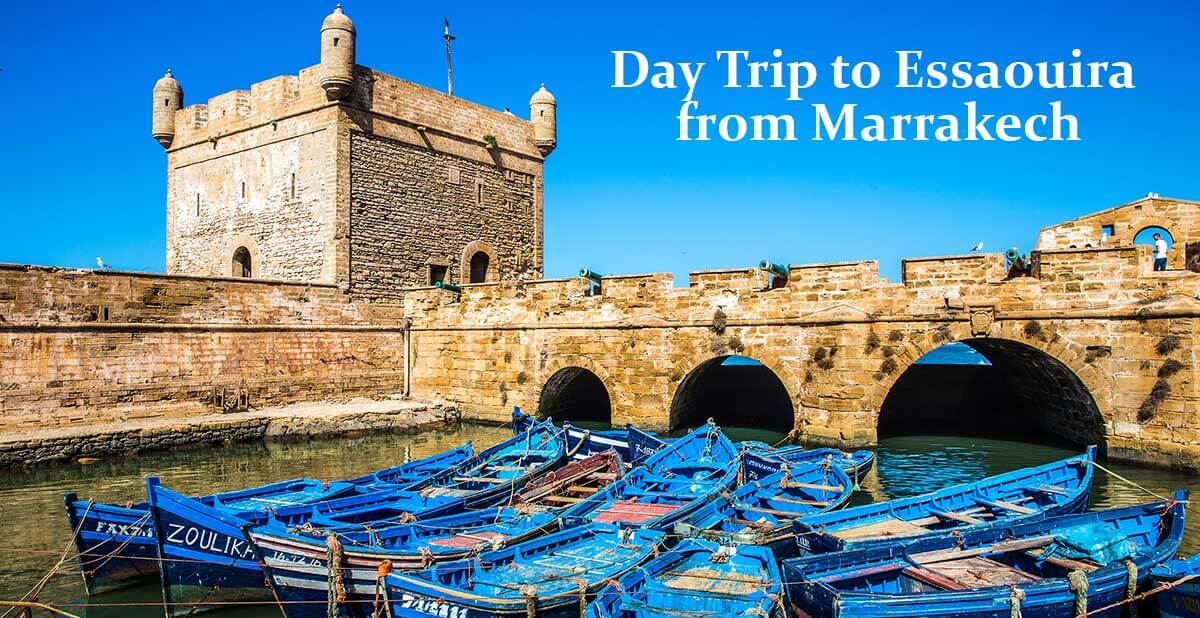 Day trip to essaouira from marrakech

The Best Day trip to essaouira from marrakech

Enjoy a day trip to Essaouira from Marrakech and relax in this quiet fishing citadel.

The departure from Marrakech is in the early morning. You will cross the breathtaking Moroccan countryside. scattered with small villages and where camels. sheep and goats live peacefully. As you sink into the desert. the argan trees will stand on your way. These trees produce berries that the goats crave. You can stop at an argan oil manufacturing cooperative traditionally run by women. Discover how argan oil is made and all its possible uses including cooking and cosmetics.

Enter Essaouira. the charming blue and white city cradle many artists. Stroll along the quays as the colorful, colorful fishing boats return to port and watch the fishermen unload their catch of the day. You can also choose to settle in one of the refined restaurants of the port and enjoy fish and other crustaceans freshly caught.

Explore the historic citadel. its ramparts and visit the Medina to discover the local craftsmen who sell their achievements in cedar wood. During your visit of the ramparts you will discover how this old fishing village defended itself from external invasions.

In addition to marquetry. traditional specialty of Essaouira. you can also relax on the famous beach during sunny afternoons. In a holiday rental in Essaouira, you have the chance to enjoy the many activities offered by the city.

The privileged geographical position of Essaouira allows you to benefit from numerous and varied sports activities, like windsurfing, or even kitesurfing. To walk around, it is on the ledge of Essaouira that you have to go, beautiful and welcoming, to have a good time, with family or friends. And if you go on holiday in Essaouira at the beginning of the summer, you can attend the Gnaoua and World Music Festival of Essaouira, a real Moroccan Woodstock.

Many excursions to the cities of Marrakech, Agadir, Rabat, or Casablanca are also possible from your vacation rental in Essaouira, to discover Morocco.

The Medina of Essaouira

The medina of essaouira, formerly known as Mogador, name from the phoenician word Migdol, which means “small fortress”, is a world heritage site by UNESCO, it is an exceptional example of a walled and fortified city of the mid-eighteenth century, surrounded by a Vauban style wall that you must visit .

Built in north africa according to the principles of the European military architecture of the time, in a perfect association with the precepts of Arab-Muslim architecture and urbanism. Since its foundation, it has always remained a leading international trade port linking Morocco and the Saharan hinterland to Europe and the rest of the world.

Essaouira also offers the example of a multicultural center as evidenced by the coexistence, from its conception, of various ethnic groups such as Amazighs, Arabs, Africans, and Europeans and multi-faiths (Muslims, Christians and Jews).

The Medina of Essaouira represents European achievement illustrating the theories of urban planning of the enlightenment, it is the only one in Morocco to have an orthogonal plan.

Inside the ramparts of Essaouira, we can find two main neighborhoods, the mellah to the east and the medina to the west. Although if you come from the port you will enter by the gate of the navy, built in 1769 overlooking the place Moulay Hassan. It is now up to you to sink into the cool and white alleys of the medina and enjoy a stroll through the streets of Essaouira, where you will discover tiny and dark alleys, with blue doors, exotic cafes, craft shops. you will be seduced quickly by the colors of the buildings.


The port of Essaouira 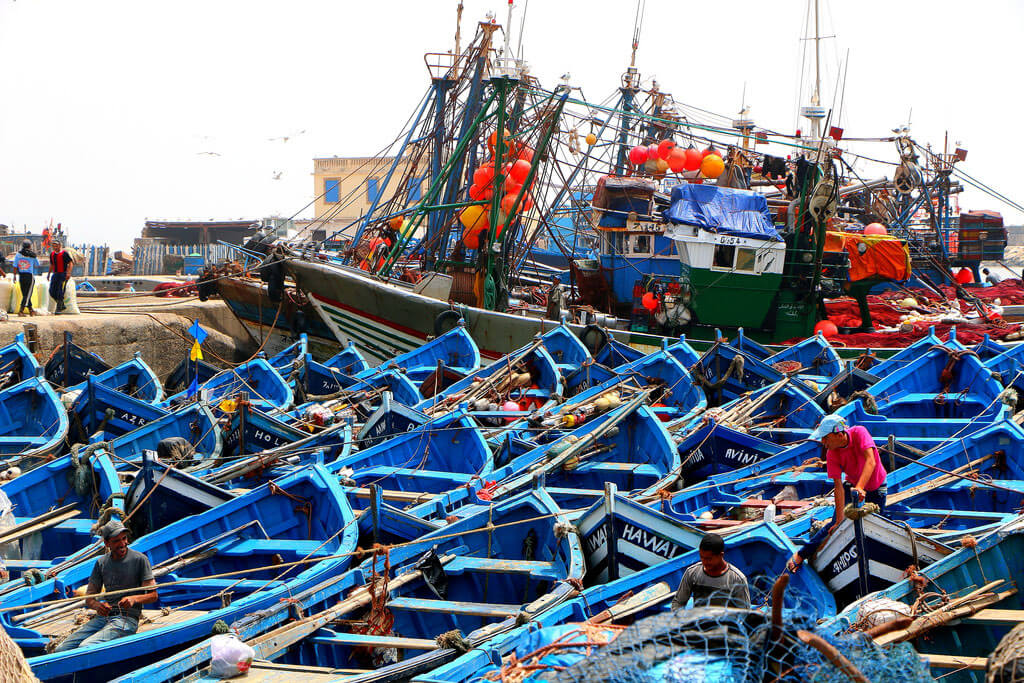 We often talk about Essaouira, its citadel, its narrow streets, its riads, its souks, its people, its exhibitions, its music, but there is little talk of its port. edged by the Mediterranean and the Atlantic Ocean, Morocco has many angling ports, Essaouira isn't the most leading of them, however it is without a doubt the most popular classic fishing gate of the country.

This port, built in the 18th century under the reign of Sultan Mohammed 3, is a very lively place with a fascinating history. Nowadays, this port remains the third sardine fishing port in the kingdom, it is very known for its traditional decor and lively atmosphere.

Located in the south-west of the medina and endowed with frantic colors and picturesque images, the port is an important cultural landmark to see in your stay in Morocco.Frenched by innumerable gulls a little aggressive and thieves in search of food. The dominant color of this port is blue, since it is supposed that the fishermen of Essaouira know perfectly the particular tones of this color which deceive the sardines.

Apart from this pragmatism, the blue color gives the landscape a relaxing aspect. The boats are small and the nets are multicolored. Here you can enjoy freshly caught sardines and grilled barely landed! A whole atmosphere, not to be missed in Essaouira.

The skala of the Kasbah Essaouira 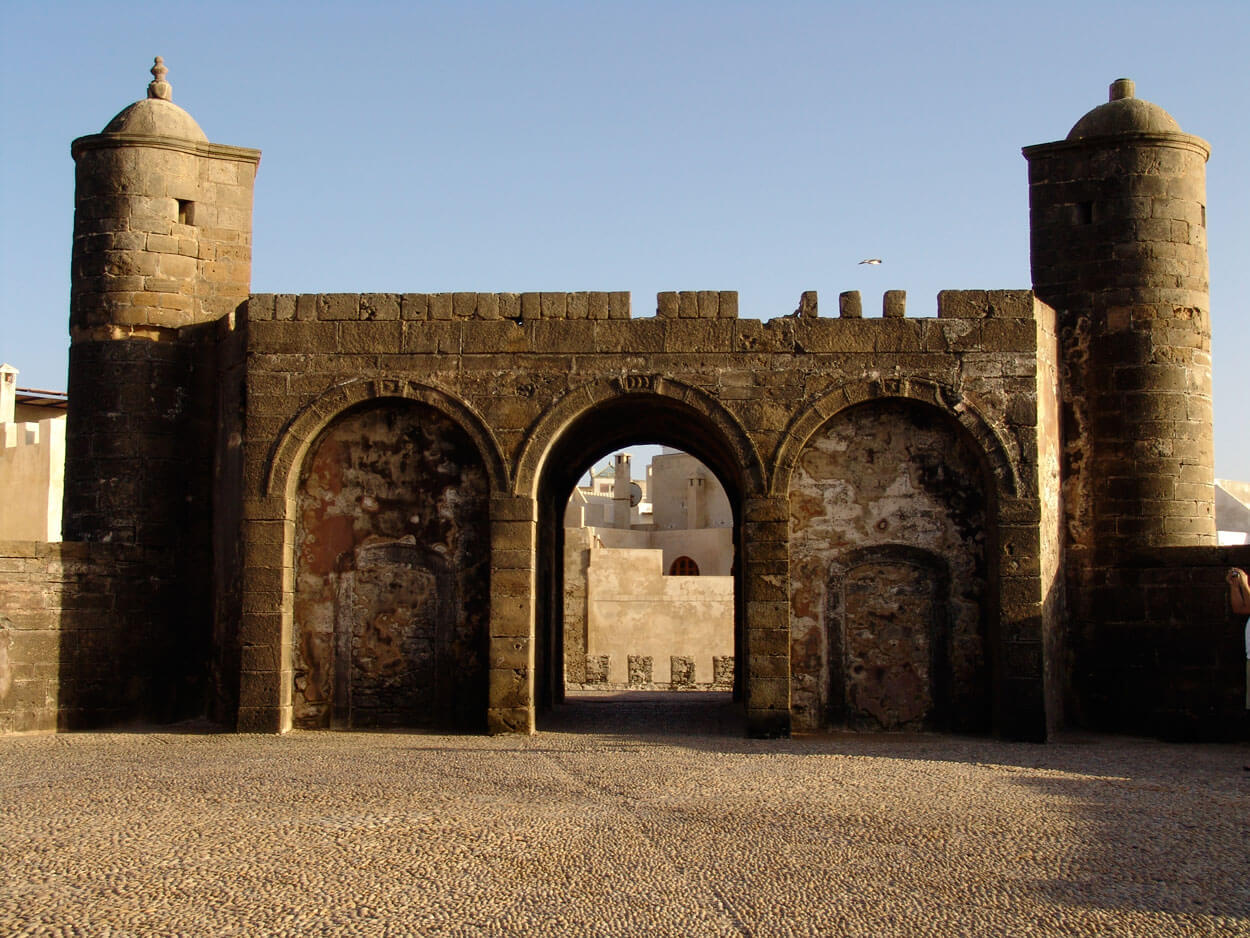 The Skala is a fortress built in 1765 by the French architect Théodore Cornut , it is an architectural and historical evidence of Spanish and Portuguese rule, it is considered as one of the unmissable sights.

The Skala of the Kasbah is a real defensive wall that used to store weapons and amunition.It represents a small fortified area to the west of Essaouira from which there are beautiful views of the harbor and Mogador Island. From its ramparts over 200 meters long and its round bastion at the northern corner of the fortification, where the arsenal of guns made in seville around 1750 still targeting some invaders from another era.

Unlike the medina, the Kasbah was designated as the place where power sat. Today the border between the Kasbah and the medina has become blurred. In this place you can enjoy stunning views of the mogador islands, the city, the place is also ideal to take full measure of the location of the city, overlooking the sea and beaten by the winds. This is where a mythical scene from Orson Welles's film "Othello" was shot, as well as scenes from the "Games of Thrones" series. 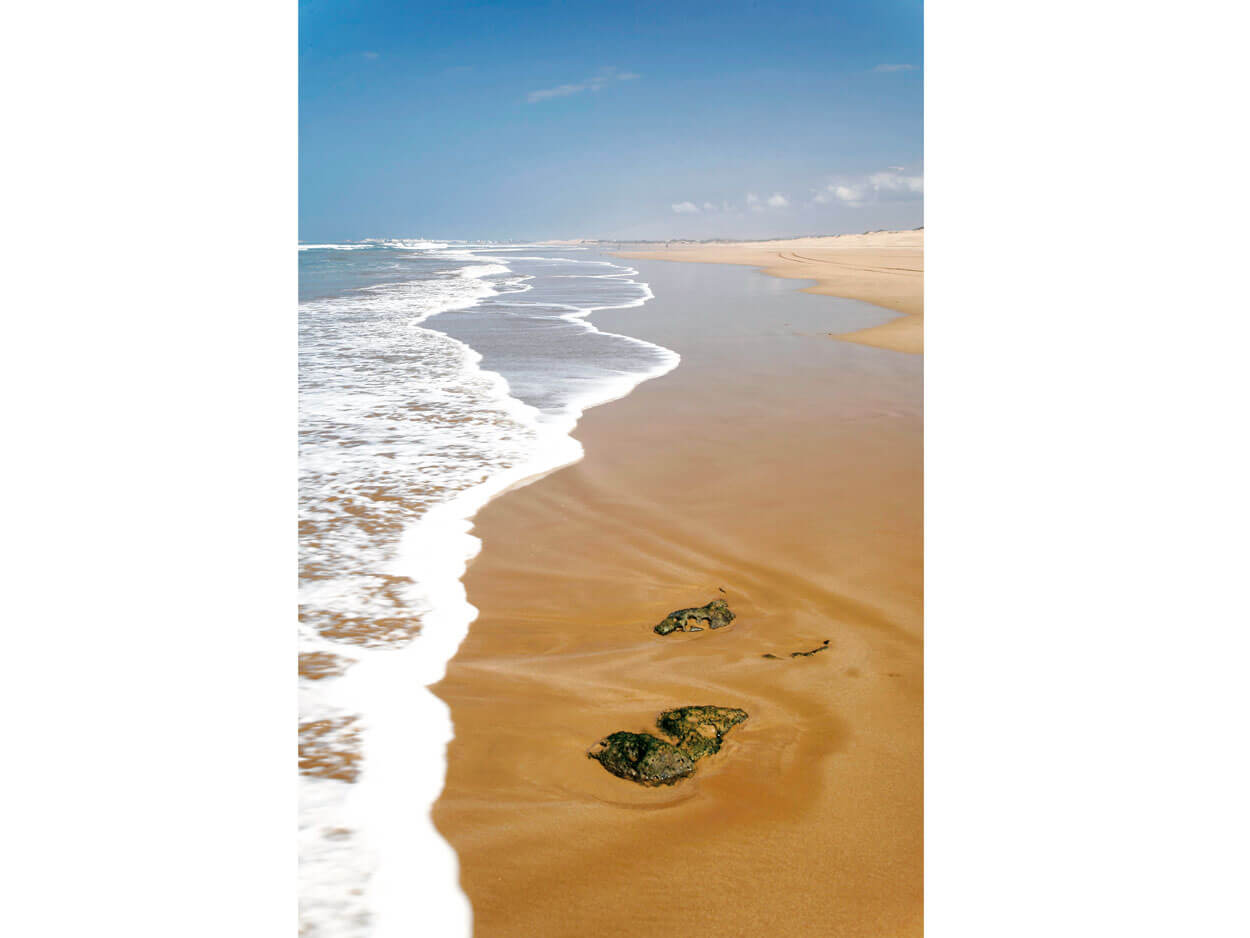 This dry and golden beach stretches for miles and miles from the picturesque city of Essaouira. It's a huge beach. The left side is reserved for the practice of surfing, because the wind rages constantly in this zone.

It's quite funny to see groups of camels waiting to be ridden by tourists for a walk through the dunes. The beach of Essaouira is very nice because it is an entirely popular and public beach. Here, the atmosphere is familiar and very relaxing. The beach is at the exit of the historical center of the city and measures several kilometers.

Moreover, the beaches of essaouira are generally well maintained and very clean. This city has been awarded with the seal of quality of the Mohammed VI foundation for the protection of the environment due to the efforts to guarantee the safety and cleanliness of its beaches.

The beach of the city is very large, and it is covered with fine sand which offers a wonderful view of the bay. In Essaouira beach you can swim or enjoy playing sports such as windsurfing. this is not everything, altough you can walk on dromedaries or make a small tour by tourist boat around the island of Mogador.

The Purpurari Islands, known also as the purple islands, its name is inspired by a purple dyeing plant, derived from marine molluscs that the Romans established, represents home to a bird sanctuary that includes gulls and Eleanor falcons.

Moreover, CNN has recently ranked the beach of Essaouira the 61th place of ranking among the 100 most beautiful in the world, it is the only Moroccan beach present in this international selection. The beach of Essaouira is in perfect harmony with the warm and relaxing atmosphere of the city.

Thanks to this climat, essaouira has inspired many artists such as painters and photographers to come to relax and capture the rich colors of Mogador. We can find artistic works all around the city in many art galleries located in the city’s medina or with local artisans who exhibit in the souks, these art works reflect the spirit of this city. Although many famous personalities have been seduced by the beach and the ramparts of Mogador that offer a splendid view of the atlantic Ocean such as Jimi Hendrix.

The beach of Sidi Kaouki near of Essaouira 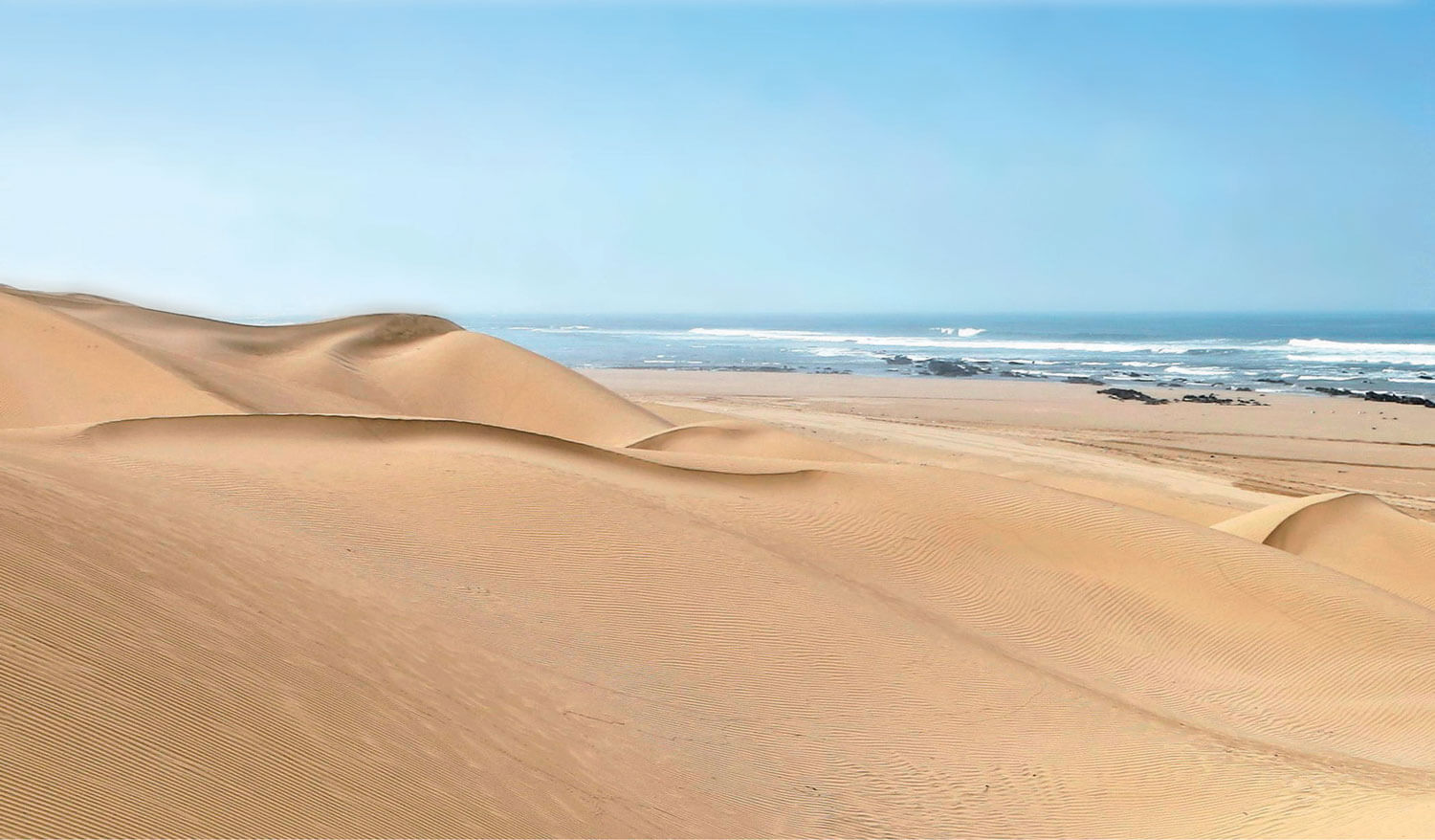 The huge beach of Sidi Kaouki is a surf and windsurf spot located 25 km south of Essaouira, it offers an ideal opportunity to discover the wild coast and camel caravan route.

With it’s natural site, its small restaurants, its inns with the sea view and its traditional charm, the beach of Sidi Kaouki is a beautiful and stunning stopover by the sea. Moreover Sidi Kaouki is a coolitude spot if you desire a perfect stop along the Moroccan Atlantic coast.

Everything is there to enjoy, wavey, windsurfing equipment, kite surfing… The narrow road that leads to Sidi Kaouki crosses a beautiful forest of argan trees and thuya which goes down imperceptibly towards the big blue. at the end of the road, you notice a small car park populated by cars, camels and Volkswagen vans.

Sidi Kaouki is a wide strip of sand stretching as far as the eye can see towards the southern coast! When you put your foot here, as in many places on this Atlantic coast, it feels like you're touching the end of the world ... When you're flirting with the ocean, another sensation is felt ... extreme coolness of the water and this is not just an impression ... As in many beaches of the Moroccan coast, the water is cold: between 15 ° C (in winter) and 21 ° C (in summer) .

the souks of Essaouira 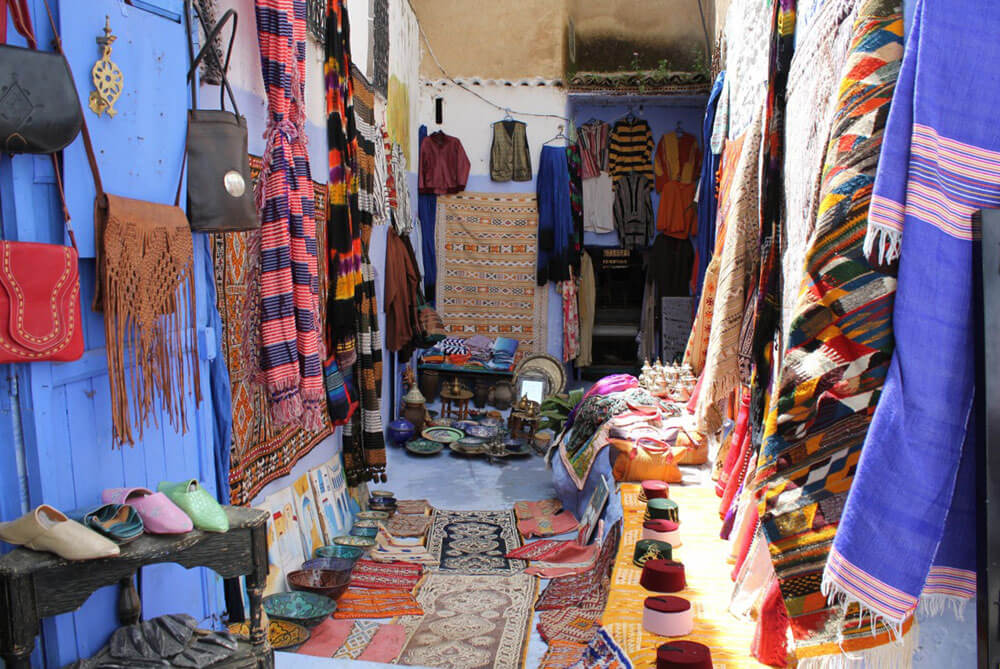 Strolling in the souks of Morocco where we can find real treasures of handicrafts and local food is something we never get tired of. While in Essaouira, souk Jdid offers divers and varied products.

Essaouira has also a jeweler’s market which is visited by both Moroccans and tourists. Despite the continuously changing lifestyle of Moroccans, some customs persist. In the countryside for example, the day of the souk has a particular importance, it is considered as a traditional dictates, in order to supply the entire region, it is held in different villages every day of the week.

The souk day is a privileged moment for the surrounding populations, it makes it possible for people of the region to stock up as well as to sell their animals there, but also to meet and exchange the last news, and even to undertake an administrative procedure.

From early morning to early afternoon, the souks is considered as the center of the economic and social life of the villagers. Although, inside the medina, the alleys intersect, creating a constant animation. Spices, fish and other victuals alongside bracelets and necklaces ... It is in the Istiqlal Avenue, under the arches of souk Jdid, that everything happens. Going up the street el-Attarine, we reach the long and very commercial avenue Mohammed ben Abdallah which leads to the mellah, former Jewish quarter.

- The price includes :the driver's fees, an air-conditioned car and it doesn't include lunch and tips

Book your Day Trip to Essaouira from Marrakech !