The Lord Of the Hight Atlas Mountains .

The French called Thami Glaoui the lord of the High Atlas Mountains or Black panther.

Accordingly , we recommend our dear clients not to miss  his past  residential palace Dar Al Pacha El Glaoui .

Thami was originally from the South of Morooco  , Telouet tribe where he spent most  of his childhood .

After the death of his father (Mohmmed ben Hammou) , Madani took over the father s business while Thami becomes an assistant to his brother.

The two brothers became so famous when they saved the life of the Sultan Hassan I  and his soldiers .

Actually , the Sultan  was on a  tax gathering trip from the berber tribes in the South of Morocco .

The two brothers rescued the sultan and his soldiers from starvation after being stuck in a blizzard .

As a result , the Glaoui brothers received two Krupp Cannons from the Sultan Moulay  hassan as a

The Lord Of  The High Atlas Mountains was very ambitious and his  appetite for power  was so big.

for this reason , Thami EL Glaoui  had done conscious efforts to help Abdelaziz ( the sultan) against Bou Hamara .

The latter was against the the sultanship of Abdelaziz and then Moulay Abdelhafid became the sulatn , afterwards.

Therefore , Thami El Glaoui became the Pasha of Marrakech and sided with the French protectorate .

Since then , El Glaoui s wealth and power  grew bigger and built an immense palace : Dar EL pacha in Marrakech  . 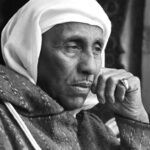 Thami EL Glaoui had accumulated a lot of wealth and  led a life of the awfully rich people;

And his business relied a lot on the trade of saffron , salt and minerals .

As a matter of fact , he surrended himself with famous celebrities such as : Winston Churchill,

Charlie Chaplin , Colette and many more .

During the 1940 s , Thami El Glaoui was one of the richest men on the planet .

Besides , he hosted the french in his Palace Dar Al Bacha and organized many lavish parties

Thami was also very generous when  he gave expensive gifts to his  European guests to impress them .

The lord of The high Atlas Mountains built a huge palace to impress his guests , Dar Al Bacha.

The flashy man , Thami , has always interest in the western culture and his palace reflects the

The plaster work , the tiles , the cyderwood doors and  ceilings explain clearly the ostentatious life of

the Lord of the high Atlas Mountains  .

Actually , he worked with the French during the colonization to maintain order in Marrakech .

Therefore , he conspired with the French to exsile the sultan Mohammed the 5 to Corsica , Madagascar and France .

After 2 years of disorder and fight against the French , the sultan returned to Morocco in 1955 .

It was so humilating for the pasha El Glaoui to kneel down to the sultan  Mohammed the 5 to beg pardon .

Afterwards , Thami had stomach cancer and died at the same year of independence 1956.

More information to know about Thami during the French protectorate .

From the beginning , Thami El Glaoui was against the polical party Istiqlal and the nationalists who

Instead , Thami was with the French and defended their interests in Morocco . Therefore , Thami s plan was to

dethrone the sulatan mohammed the 5  as he did with previous sultan Moulay Abdelaziz.

Accordingly , the uprising against the French and also their Moroccan supporters was getting higher and higher .

However , Thami was ready to do anything to fight the sultan and the nationalists , a complete disorder.

If you want to know more about The lord of the high atlas mountains , check the tours we do :

We can also provide our dear clients with Transportation if they need it .